And now, the REST of the story…

Cold and frightened to death, we asked a crew member if we could get a blanket.  We were wet from standing outside and we were shivering.  The crew member actually told us we could “rent” a beach towel.  I looked at the crew member and said something like “You have got to be kidding me.”  I reluctantly paid the lady but I guess it didn’t matter, we were going to be dead soon.

It was now completely dark outside and a new format for the rocking began.  Front, back, left, hold, left some more, hold, left even more, bottles crashing, then right, hold, a little farther right, hold, some more right, more bottles crashing, other crashing sounds, and people crying.  The lefts and the rights started to last longer and longer.  Left, left some more, a little more, hold, even more, hold, even some more and just when I thought we were going to go back right, the boat would slide even more to the left.  I was now officially terrified.  All kidding aside, we were seriously going down.  To make matters worse, there were some Spanish speaking crew members screaming at each other and dropping some sort of measuring device off the sides of the boat and reeling them in.  They would yell at each other with a look of horror in their eyes.  I don’t speak Spanish but the communication was very clear.  Abandon ship!  “You have got to be kidding me!”

Have you ever wondered what your last words in this lifetime would be?  I never really gave it much thought before this time but mine would have been, “You have got to be kidding me!” along with several expletives.    Yes, my final words were going to be cuss words.  I am doomed for eternity for sure.  I would end up taking the hell express and I had my very own toll tag so I could skip the lines.  You were supposed to enter the afterlife on a good note, not cussing profusely.  For the remainder of the trip, I said absolutely nothing.  I held on to the table with one arm and seized my wife’s withered and swollen hand with the other.

Now, too frightened to even open my eyes, I sat on the floor inside and hooked my arm around the leg of a table.  I started praying however, it got so scary at times, I could not even finish them.  “Dear Lord baby Jesus, please, … (CRASH, left, left, hold, hold, left some more, things crashing, people crying)  I was too scared to even pray and I know that cannot be good.  Each time I tried, the scene kept getting worse and frightened me even more.

I understood for the first time why I was forced to memorized prayers as a child.  I am here to tell you, take some time to memorize at least two prayers.  Memorize them well enough that you do not even have to think to say them.  I believe this is how I survived that boat trip.

I repeated the prayers over and over and retreated inward.  As I went deeper and deeper, the screaming and crying around me faded away.  I never stopped and to this day I wonder how many Hail Mary’s and Angel of God’s I said but it must have been at least 10,000.

All of a sudden, the rocking subsided and there were city lights ahead.  WE ARE ALIVE! WE MADE IT!  We stood up and held each other and cried.  There were bigger plans for us and somehow we got a second chance.  Life would be different from this point forward, however, first we had to get off the boat.  We waited and waited and watched as ambulance after ambulance come to the boat.  We waited over an hour and a half before we were able to leave.  We were then told that if you wanted to take the excursion the next day, the boat would be leaving at 6am.  I looked at my wife and said something like YOU HAVE GOT TO BE KIDDING ME!

As we made our way off the boat, we had to walk through some of the lower sections.  One area I recall very vividly was the casino.  EVERY single table was over-turned, broken in half, or on top of one another.  We found out that at least one man had died on the boat and that there were at least 7 ambulances to treat people with severe dehydration.  We got a taxi and went back to the hotel that we had checked out of earlier that morning.  While waiting in line to check back in, I literally could not stand up.  What was happening to me?  I had to hold onto something or I was certain to fall over.  I then discovered what it was like to have sea legs.  It is not really a good experience and I would not recommend it.  This continued for two more days but heck, I was alive.

We made it to our room but refused to talk about the trip.  We turned on the news the next morning to discover that it was the first time in history for a tropical storm to develop that early in the season.  WE WERE IN A TROPICAL STORM!  The seas got as high as 65 feet and the winds were sustained at 70 MPH with wind gust even higher.  The news went on to say that at least one barge at sea was sunk by the storm.  If we had gone one day before or one day after, it would have been no problem.  I am neither a statistician nor a gambler, but try to calculate the odds of us being on that boat, on that day, and a tropical storm flaring up on the exact location.  There was a reason I was on that boat, and I needed to understand why.

After the “Bermuda Triangle Tragedy” our household was banned from talking about it for nearly a year.  I was unable to watch any movie that had any kind of boat in 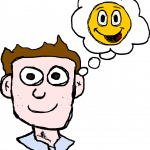 As I look upon that event now, I can actually do so with gratitude.  I believe that the boat allowed me to face my deepest fear: Being on the ocean, at night, in a storm, in a tropical storm with no land in sight.  If I could make it through that, I could make it through anything.  Within months after the event, I started to seriously look for another job.  When the feelings of extreme fear came to me after that time, I could go back to that event to help me get through whatever fear I was experiencing.